During a special operation conducted in Kurakkanhena, Kalpitiya today (11th March 2021), Sri Lanka Navy was able to foil an illegal migration attempt by apprehending 24 persons involved in this unlawful act.

Having spotted a suspicious lorry parked near the Kalpitiya lagoon in Kurakkanhena area, the Northwestern Naval Command engaged in this special operation made further interrogation and found there were 24 persons including the lorry driver. As it was revealed that they were waiting for a boat to arrive from Kalpitiya lagoon, preparing to migrate illegally from Sri Lanka to a foreign country by sea, the group and the lorry were taken into naval custody.

Among the group were 20 males, 01 female, 02 girls and 01 boy. Of these individuals 09 were residing in Batticaloa, 06 in Jaffna, 05 in Mullaitivu, 03 in Trincomalee and the driver of the lorry in Puttalam. The Navy suspects that the person who orchestrated this migrant smuggling is also among the group.

The group of individuals held during the operation along with their lorry were handed over to the Kalpitiya Police for onward legal action. Meanwhile, the Navy will continue to carry out its operations to curb such illegal migration attempts by sea. 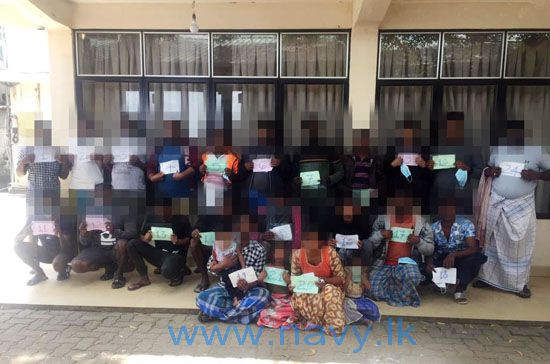