The Navy managed to recover several explosive items secured to the seabed by means of a buoy, during a search operation carried out in Nayaru sea area on 26th April 2022. Among the recovered items were 04 Water Gel sticks which are used as commercial explosives and several other items used for detonation of explosives.

Sri Lanka Navy has been conducting regular operations to prevent this nature of illegal fishing practices performed by a handful of people disregarding its harmful repercussions on marine ecosystems. The search operation was carried out in seas off Nayaru on 26th April by SLNS Gotabaya in the Eastern Naval Command. Accordingly, the Navy managed to recover 04 Water Gel sticks, 02 non-electric detonators and a 06 inch long safety fuse. The set-up was in a waterproof container, secured to the seabed by means of a buoy.

It is believed that the set-up has been made ready with the intention of using it for blast fishing. The seized explosive items were handed over to the Mullaitivu Assistant Director of Fisheries for onward action. Meanwhile, the Navy continues to be vigilant to prevent illegal fishing practices associated with explosives. 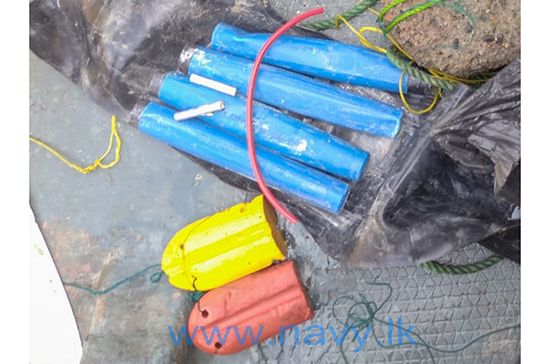