The Navy Sports Club (SC) won the western province under 24 open rugby 7s championship and crowned as plate champion in the Nippon Paint Inter Club Rugby League 2021/2022 recent rugby encounters. Calling on Commander of the Navy, Vice Admiral Nishantha Ulugetenne who is also the President of Navy Sports Board at the Navy Headquarters today (21st September 2022), the winning captains of respective teams shared a moment with Commander of the Navy with the trophies clinched by the Navy.

Meanwhile, there was tough competition for the Plate segment among Navy SC, Army SC, Air Force SC and CR and FC – division one sports clubs, in the Nippon Paint Rugby League 2021/2022 organized by Sri Lanka Rugby. Topping the points table, the Navy SC won the Plate segment over other competitors and got hold of their trophy on 16th September.

Under the able guidance of Commander of the Navy, Vice Admiral Nishantha Ulugetenne, Navy athletes have made a number of achievements in recent times as a result of thriving atmosphere in the Navy for the promotion of sports. 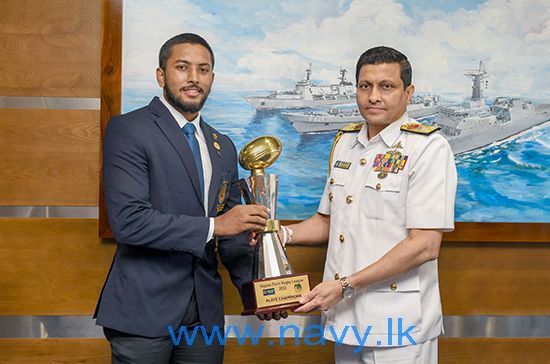